I made it all the way from Amarillo to Denver, 440 miles. That's a record by motorcycle for me. My travel speed is maximum 52 mph with the camper, so long hours are needed to cover that kind of tarmac in one day. The last 40 miles was at night, which I dislike in the extreme.
But remember, this is not a travel documentary, if you want to see the sights, it is best to get over there yourself. However, sometimes I'll describe the scenery, when I'm in the mood.

MORNING
Not only did I not find the Walmart in Amarillo, I headed north before 7:00 AM into a solid chill. Worse, no gas stations on the route means I ran dry seven miles from Dumas and had to use my emergency gas to get into town. Here is the first volcanic hill I passed. Had I not read several books on geology, I would not have known what to look for. This area is highly unstable over time. Lots of time, I mean, like millions of years.

While there, I decided against a home-cooked break fast and stopped at McDonalds. The locals tell me I just missed a 4:30 AM hailstorm. Good, something like that puts my solar panels out of business. It is due to be a sunny day (always expect so after a hailstorm). My I say something about McDonald’s coffee? It comes in a thick Styrofoam cup and that is important to the enjoyment. How so? Well, the cup will hold its shape when the lid is removed. Other fast food joints, the cup will distort when picked up without the like.
This is repeat info, but a large part of coffee is the aroma of the evaporating volatile oils in the steam. A lid will block out that factor. Also, coffee in too large or small a size is also wrong, as the steam needs the coffee to cool at a steady rate to maximize the sensation of “fresh coffee”. That’s why I laugh when I see people knocking back tiny cups or Bubba with his 16 oz big gulp.

I hit cool weather and bad pavement for a considerable distance north of Amarillo, so I improved that by cutting a diagonal northwest across New Mexico. This is where I began to experience a phenomenon unknown in my younger days. It is disconcerting to travel a beautiful four-lance for an hour and wonder why I am the only vehicle on the road. See photo. It was utterly deserted until a truck came along. [Author’s note: I was to experience this many times during this trip, this was only the first officially recorded instance.] 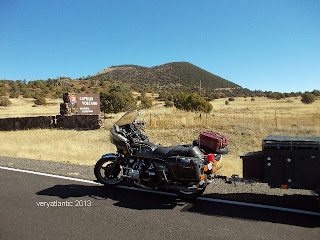 Turns out this terrain is full of extinct volcano cones. I tried to visit one but in addition to the nasty park service habit of not posting the admission price until you’ve committed to a drive well into the park, the volcano people would not let me in with the trailer. Nor would they politely say they’d watch it for me an hour if I uncoupled it. I’m certainly not leaving it unattended in their parking lot. It is becoming extremely evident the Forest Service does not require looks or intelligence. But they definitely make uniforms in XXXXL.
The population of northeastern New Mexico is three cows. I know there must be more to keep the terrain from overbalancing toward the forest rangers. Great scenery, becoming greater as the Rockies appear on the horizon. Plainly, it has been snowing no matter what the reports say. Thus, I plan to blast over the Rockies on I-70 west from Denver. That route goes to nowhere in Utah, but snow or not, I’m heading there. It will be okay once I get past Vale unless I hit an early blizzard. 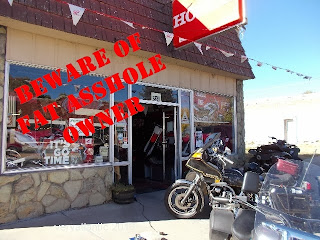 The Honda burned a wire near Raton, NM. I had directions to a car parts store, but passed a Honda dealership. I asked if they could splice the wire. Yes. I had diagnosed and located the problem so they didn’t even have to think. I pointed to the location (of the wire), we even used my spare wire. I held it while the shop hand soldered it. He did a great job, but the fat slob of an owner, who didn’t even go out to inspect the work, skinned me for $60.
Yes, I know I should have settled the price first, but on basic repairs, you just don’t have time to haggle every detail. I was expecting $20. But I don’t argue with pig-shaped people on the roadside. That’s Raton Honda, in Raton New Mexico, run by a total asshole.
The Internet says he is one of the Polage clan, hicks and hucksters--there is a reason small towns are full of nobodies. I should have suspected as much when he had to clear a path through the empty Big Mac wrappers to stand up. He’s so stupid he probably thinks he got away with shafting some dumb tourist. Bubba, that will be the most costly mistake you ever made.
For clarity, that's R & D Honda, on N. 2nd Street, Raton, NM. Don't go there, the owners or whoever was in charge the day I was there are low-life scum.
Nope. I won’t tell you what I did. He might figure out it was me, but I don't suspect he'll be in the rip-off business much longer. Now, allow me to direct your business across the street to A&M Repair, as shown here. Better people, they gave even lent me the pliers the Raton mechanic used to crimp the butt connectors. And gave me a foot of extra wire for free. Nice people, worthy of your patronage. Here is a nice big advertisement for their company. They are nice people. That’s across the street from the Honda place that steals your money. 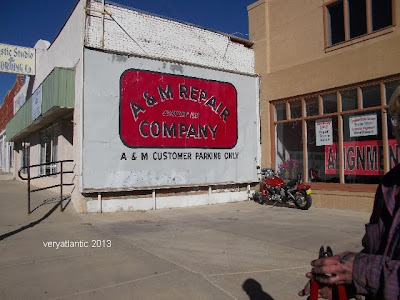